Digging Up Days Past

GLENS FALLS - Archaeologists digging through the area around the Henry Hudson Town Houses complex discovered an early-20th century Model T engine block, with original pistons, discarded in the pit of a former outhouse.

“It’s along the lines of one of the neatest things I’ve ever found,” said Tracy Miller, project director with Hartgen Archeological Associates.

An antique car expert dated the engine to between 1909 and 1919, said Steve Riester, an archeologist working on the project.

“Only two payments left,” Glens Falls Mayor Roy Akins joked when a Post-Star reporter told him of the find.

Apparently the outhouse pit was being used as a garbage dump, because it was filled with coal ash and other discarded items such as old bottles, Miller said. Artifacts uncovered elsewhere on the dig site led archaeologists to believe a young child died of an infectious disease sometime around the early 1900s, Miller said.

A baby carriage, pieces of dolls and other toys were buried along with medicine bottles in a garbage pit.

“It’s really strange. Basically everything we found in this pit is associated with a child,” she said.

The archaeology firm is studying what once were foundations and backyards of a house and a four-unit apartment building that were demolished when the townhouses were built between Broad Street and Hudson Avenue in the early 1970s.

The townhouses will soon be demolished in phases and replaced with new apartment units.

Artifacts being uncovered will be turned over to the state Office of Parks, Recreation and Historic Preservation and likely will ultimately go to the New York State Museum in Albany, Miller said.

The archaeology firm will prepare a report of their findings and the historical context.

The study comes at an opportune time, as the city is about to celebrate its centennial next year, Akins said. “It’s great to see some of these pieces of history pop out, whether it be 1910 or the various stories of our family histories,” he said.

Federal and state laws require an archaeological review be done before the start of any construction funded by the federal Department of Housing and Urban Development, Miller said.

About 70 houses, some dating back to the mid-1800s, were demolished when the townhouses were built. Using historic maps, the archeologists identified two former housing lots on the townhouses property that were easily accessible under a parking lot and playground

The original St. Alphonsus Church on Broad Street was built in 1855 as a parish for French-Canadians who had settled in the neighborhood, Akins said.

Evergreen Partners, the Maine-based real estate group redeveloping the townhouses complex, plans to use the historical report as the basis of an information kiosk to be placed in the community room of the new complex, Miller said.

Evergreen Partners, through its subsidiary Hudson Avenue Housing Associates, plans to demolish the existing 136 townhouse units in phases and replace them with new construction.

Demolition of the first building is expected to take place next week, said Charles Allen, a principal in Evergreen Partners. A celebration for city officials and townhouse residents of the start of construction is scheduled for Aug. 21. 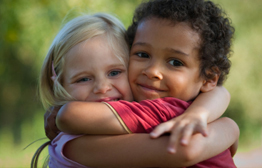